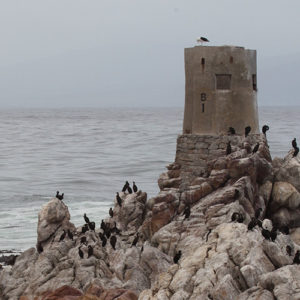 Under Cover of Darkness is a project concerned with the history of women in servitude, especially slavery, in Cape Town. In its first manifestation, the project was realized as an exhibition at the Iziko Slave Lodge, which drew on the collections of the Iziko Social History Centre. The exhibition is not considered to be a static instantiation. Instead, the space is conceived to function as a prompt for continuing engagement with this history and continues to be used as a venue to stage panel discussions, meetings and performances. The project seeks to bring into consciousness the legacies of slavery in postapartheid Cape Town. In order to bring about this consciousness, the project focuses on the lost, buried or fragmentally present narratives of individual women, whose voices cannot be reconstructed simply by reference to colonial archives. Under Cover of Darkness therefore employs consultative, creative and artistic methods of curation intended to evoke a sense of the women’s narratives not as distant historical figures, but rather human beings with whom we can empathise.

The twelve lives brought to light in the Under Cover of Darkness exhibition try to stand in for the many stories that will never be told of women forced into slavery and oppressive labour under colonialism. The challenge of the exhibition is to find a way to bring these women’s lives out of darkness. Most lives passed unrecorded. Women under servitude were written about only when they intersected with the colonial project, most commonly as property bought or sold; when they broke colonial laws; or in the rare instance when a woman freed herself and became a property owner. Most women living under these conditions never owned anything. This is further challenge – the exhibition has to find ways to animate stories with little evidence of the material lives of its subjects.

Uncovering the stories of these women lays bare the distorted patterns of race, gender and labour that were set up in early colonial society. Contemporary works by artists Gabrielle Goliath and Azazole Ndamase give expression to the continuation of these patterns of inequality.

Under Cover of Darkness is a collaboration between The Centre for Curating the Archive at the University of Cape Town, Iziko Museums and independent artists, researchers and activists.